The nice chaps at eWeek turned up at the 2GX:Groovy/Grails Experience and interviewed me and Scott from aboutGroovy on the subject of Groovy and Grails and its relationship to Java. Check it out
Posted by Graeme Rocher at 12:37 pm 3 comments:

At 2GX - The Groovy/Grails Experience, I did a presentation on empowering Spring with Groovy DSLs which demonstrated Grails' Spring BeanBuilder in action.

The demo showed how Spring and Hibernate can be dynamically configured at runtime using BeanBuilder and then interacted with via the Groovy shell. I promised a few I would make it available so here it is.

You'll need Groovy 1.5 and Gant setup before you start then just type: 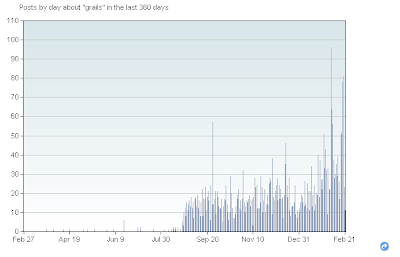 Clearly, we still have a long way to go to make Grails as hugely popular as things like Spring and Hibernate, but we're heading in the right direction which is great news.
Posted by Graeme Rocher at 11:04 am 9 comments:

See you at the Groovy/Grails Experience

Last time there was a major Groovy/Grails conference, we promised to get Grails 1.0 out in time for the conference, somehow we slipped a few months ;-)

This time there is no such slippage and the 2G - Groovy/Grails Experience is coming to Reston, Virginia on the 21-23 of Feb! Organised by the No Fluff crowd, it features an amazing amount of great Groovy & Grails talks from some great speakers (other than me of course ;-).

I'll be doing 3 talks on various aspects of Grails and can't wait, its going to be a great event. See you there!
Posted by Graeme Rocher at 11:29 am 9 comments:

We've put the finishing touches on Grails 1.0 and its out. Time to celebrate with some sleep.. enjoy!
Posted by Graeme Rocher at 10:54 am 12 comments: